With the latest world of warcraft expansion now in full effect, everyone is patched up and roaring their way through new content at either lunatic speed or just taking a relaxing journey. While the initial pre-launch of 8.0 was filled with large imbalances and content issues, we have seen the official expansion lay to rest many of the 8.0 introduced game bugs. So far BFA has had a good launch so what are the critics saying about it?

Battle for Azeroth is all about the Horde’s identity crisis

Most initial reviews are off to a great start, and to celebrate the great launch we decided to play even more world of warcraft. 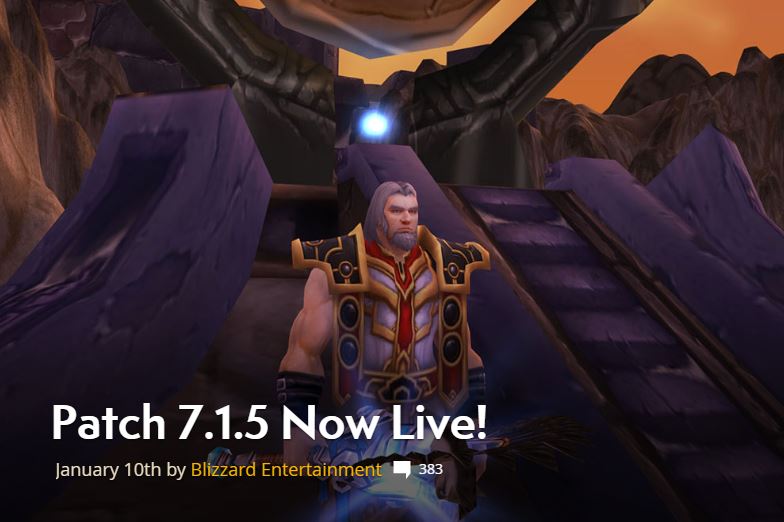 blizzard is ringing in the new year with a brand new patch. Patch 7.1.5 offers a variety of new content, including a new Timewalking event, Micro-Holidays, and the return of the Brawlers’ Guild. Dive into our previews and developer Q&As to learn more about each of them.

After many weeks of solid working on our next template we can finally show you all the finished product!

Our template is on sale now!

Your airwaves are about to be invaded by the Iron Horde with our latest Warlords of Draenor commercials. Check them out below, but word to the wise: it’s best to try not to make eye contact.

Celebrate 10 Years of World of Warcraft

With Warlords of Draenor set to launch on Thursday, November 13, we’ve seen a few questions about how that fits in with our plans for the upcoming 10-year anniversary content. We’re looking forward to celebrating this epic milestone with you, and we want to make sure everyone has plenty of opportunity to take part while still being able to fully enjoy what the expansion has to offer.

The 10- year anniversary celebration will begin in-game on Friday, November 21 and will last until Tuesday, January 6, 2015 at 10 a.m. PST. Everyone who logs in during this time period will receive the incredibly cuddly, feisty, and fiery new Molten Corgi to love, pet, and call their own. You’ll also be able to participate in a pair of special events to commemorate the occasion.

One of WoW’s classic 40-player dungeons, Molten Core, will be available in Raid Finder during the anniversary period for level 100 players. Making it through the underground gauntlet and defeating Ragnaros will reward players with a Core Hound mount and a Warlords of Draenor Raid Finder–quality helm (100% guaranteed!). For a walkthrough of the dungeon as it stands today, check out our Revisiting Heroism’s Past – Molten Core guide.
Southshore vs. Tarren Mill—The Battle Continues

To recapture the feeling of the endless tug-of-war of early WoW PvP, we’ll be opening a Team Deathmatch–style Battleground based on the timeless struggle between Southshore and Tarren Mill. We’ll have two different brackets for players to take part in: one for levels 90–99 characters and another for level 100. Unlike the old days of Tarren Mill vs. Southshore, there will be a clearly defined victor, so you’ll need to work as a team or face crushing defeat. A win will gain you a shiny new title: either Tarren Mill Terror for the Alliance or Southshore Slayer for the Horde.
Onward into Warlords of Draenor

With the release of Warlords of Draenor, all unrated PvP Battlegrounds, Skirmishes, and other unrated PvP activities will be available immediately. The new rated season will begin Tuesday, December 2 at 8 a.m. PST.

We also wanted to make sure that everyone had time to level up before we opened our first Raid dungeon, Highmaul, in Normal and Heroic modes. These will open at the same time as the rated PvP season (December 2), with Raid Finder and Mythic modes opening the following week. We’ll provide a complete schedule in the future for those who wish to start planning their new Raid calendars.

The official Cinematic Trailer which can be embedded in this page!
Enjoy the YouTube Video.

Hellscream, the prelude to Warlords of Draenor

“We will never be slaves! But we will be conquerors…”

The pit lord Mannoroth is dead.

Gul’dan and his followers are in chains.

In one night, Grommash Hellscream exposed and thwarted the forces that meant to subjugate the orcs. In one night, Hellscream proved himself a worthy warchief to the Iron Horde and set his people on a violent collision course with another world in another time.

But this was not meant to be. Who warned Hellscream of Gul’dan’s treachery? Who convinced him that Azeroth was a foe worth defeating at all costs?

Before Gul’dan’s dramatic fall, two strangers arrived on Draenor: Garrosh Hellscream, the deposed warchief of the Horde on Azeroth, and Kairozdormu, a bronze dragon whose motivations were clouded in mystery. Thenewest World of Warcraft short story, “Hellscream,” reveals how their actions on Draenor have placed all living beings on Azeroth in mortal peril. Read the short story here, and then delve deeper into the events surrounding the Iron Horde invasion in our lore archives:

Patch 5.4: Siege of Orgrimmar is nearly here, and we’re pleased to present you with the official trailer! Strap in, because this is going to be a bumpy ride. [wowhead id=”107956″]